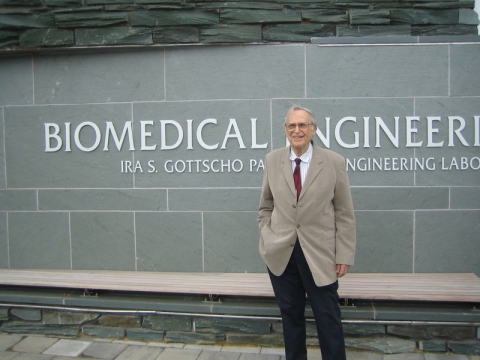 Walter Welkowitz served as the founding chair of the Department of Biomedical Engineering from 1986 to 1990. He established the first biomedical engineering program at Rutgers University, which progressed from a master’s program within the Rutgers Electrical Engineering Department to a doctoral program—to a department of its own in 1986.

Welkowitz was born in Brooklyn in 1926. He received his bachelor’s degree from Cooper Union and his master’s and doctorate degrees from the University of Illinois, all in electrical engineering. He first entered the field of biomedical engineering as a student in William Fry’s bioacoustics laboratory at Illinois, penning his thesis on ultrasonic effects on muscle. He interrupted his studies in 1944 to join the U.S. Navy, where he served as an electrical technician with expertise in radar and radio control during World War II.

After earning his degree, Welkowitz taught at Columbia University for two years before entering the private sector. He spent more than a decade at Gulton Industries working on medical instrumentation that ranged from an intracardiac catheter microphone and pressure gauge to a physiological monitoring system. He joined Rutgers University in 1964 as a professor in the Electrical Engineering Department, where he served as chair before establishing the Biomedical Engineering Department. Welkowitz retired in 1993.

Welkowitz’s research included control systems for heart assist devices, the use of computers in medicine, and engineering-informed indices of cardiac status. Holding over 20 patents, he was cited as one of the top 10 inventors of the 20th century for his co-invention of the artificial heart assistance device. His other accomplishments include the first publication on computer vision and the invention of the ultrasonic flowmeter, leading to the widespread use of ultrasonics.  Welkowitz authored Engineering Hemodynamics and co-authored Biomedical Instruments.

He was a founding fellow of the American Institute of Medical and Biological Engineering (AIMBE) and a fellow of the National Academy of Science.