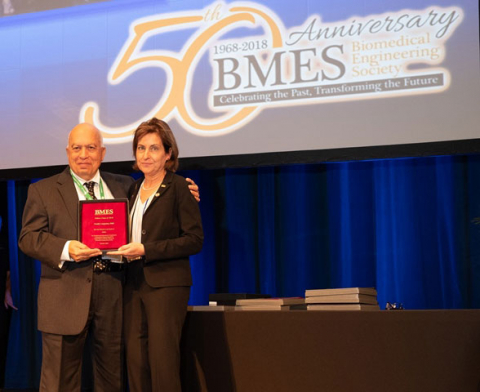 According to Langrana, this recognition is among the highest honors he’s received over the course of his career.

“I’ve been a part of the BMES for a long time and while I am personally pleased to be honored by BMES, I am especially proud to be recognized alongside so many talented biomedical engineering professionals,” he said.

The level of fellow is a professional distinction and is conferred by the BMES board of directors and recognizes those who have made significant contributions within the biomedical engineering field and have also demonstrated leadership within the organization.

As a researcher, Langrana’s expertise is in the field of biomechanics and biomaterials, particularly in the areas of spinal fusion, development of spinal disc prosthesis, and testing spinal implants. His work has been extensively published and presented at international conferences.

He was awarded the H. R. Lissner Medal in 2008 for outstanding achievement in the field of bioengineering, one of the field’s highest honors from the American Society of Mechanical Engineers (ASME). As an educator, he was honored as the Mary W. Raisler Distinguished Teaching Chair Professor in 2000 and received the Rutgers Teacher-Scholar Award in 2008.

Langrana served as chair of the BME department from 2005 to 2017. Under his leadership the department grew to include new research areas, a dedicated teaching and research facility, and 13 new faculty members. The program also received its first two ABET accreditations in August 2007 and a second in 2012.